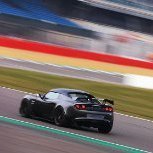 Top Posters In This Topic

I definitely would do all 4 at the same time otherwise you are going to mess with the front rear braking balance.  This will be even worse on track as the pad friction changes with heat this will be a

Def do both axles. You could try Carbon Lorraine - I have them and rate them. RC5+ on the front and RC6 on the rear which are higher-friction. It gets the back axle doing a bit more.